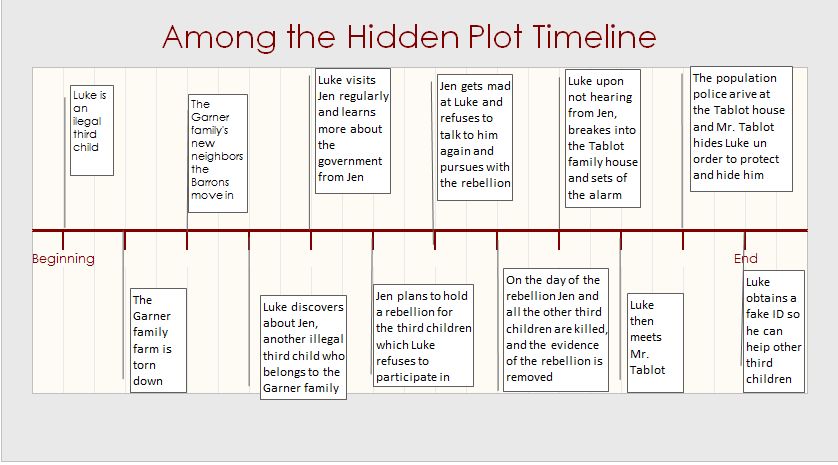 PARTs of the story

Parts of the Story:
A-Exposition
The exposition of this story is that Luke is a "third" child
B-Rising Action
The rising actions to the story are
The Garner family farm being torn down to make room for the Barrons
Luke being forbidden to go near the window
Luke meeting Jen
Luke having regular visits with Jen, and
Luke gradually learning more about the government and the Population Police
Jen introducing the idea of an uprising of Shadow Children
Luke denying to participate in the uprising and losing respect from Jen
C-Climax
Jen continuing with the uprising of the "third" children
D-Falling Action
Jen and all the other "third" children are killed in the uprising and all the evidence of the uprising were removed
E-Resolution
Luke gets a fake ID and goes to the Lee Grant at the Hendricks School for Boys in order to start helping other "third" children like Jen attempted to

"He had never disobeyed the order to hide. Even as a toddler, barely able to walk in the backyard's tall grass, he had somehow     understood the fear in his mother's voice." (Chapter 1, pg. 1)
This quote is significant because it gives the reader an insight into Luke's personality and how he is always following the             rules
"Then, more to herself than to him, Mother added, 'And things could be worse.'
This quote is significant because it signifies the fear of that Luke's family has and that they are grateful for what they have

The main theme of this book is people's rights. In the book many people's rights are taken away as the Population Police's law on having only two children. Also, Luke and Jen explore and learn about the rights people had before their freedom was taken away. Similarily, Haddix introduces a consequence of what might happen in the future if the resources we own become very limited and our world gets overpopulated.